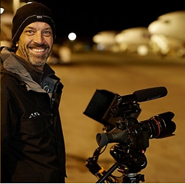 It’s time for another guest post and we’re fortunate to have an excellent article by Denver Photographer Don Cudney. In it Don shares his thoughts about how experience effects pricing. Don is a member of the American Society of Media Photographers (ASMP). That’s him there on the left shooting HDSLR video on a chilly night.

When it comes to bidding on a job your level of experience should mean nothing if you are just as capable of pulling off a shoot as your competitors. Seriously. Has a client ever asked you to bid less because of your lack of experience? If they did they’re cheap and not a good fit for your business.

I recently took two fellow photographers to lunch. One has been shooting for over twenty years, the other just under two years.  Days before our lunch both photographers were called and bid on the same large assignment.

Now here’s the irony: only the photographers were having this dilemma. The client had no idea how long either of them had been in business — he was simply looking to hire a photographer, one or the other.

Remember, only you know of your inexperience — the client called you. Remember when you make your bid that they did not call me or someone else, they called you! I’ve spent 20+ years bidding against photographers with a lot more talent and experience than I had in some cases.

your right with "It doesn’t matter if you’re lack experience but you have the guts and you put 110 percent on your work it is a worthy to have better price." As they said no guts no glory.

Thanks for posting,i agree on your blog. It doesn't matter if you're lack experience but you have the guts and you put 110 percent on your work it is a worthy to have better price.Keep it up, it helps the inexperience photographer to excel in their craft.

Excellent advice from Don. Everytime I negotiate with myself, it never ends well. And it's just bad business.

Great post. Even though I am middle aged, I've just started playing out in a band/solo. I am often as nervous as hell but the audience does not know that. It's not about how you feel inside but how you present yourself to the audience that counts. If you have a reputation then people are coming to see you/hire you based on that reputation. If, like most of us you are just another person, then why lay your soul out for all to see. That's not to say, oversell yourself but at the same time, why undersell yourself.