Frustrated? Don’t You Dare Give Up! 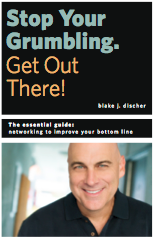 This post is an excerpt from my book, “Stop Your Grumbling. Get Out There! (The essential guide to networking to improve your bottom line.)” If you want to get your hands on a copy, it’s available from Amazon in paper or Kindle editions.

If you quit, you’ve failed… so don’t quit!

You remember Mr. Potato Head? The toy was almost dead after its market debut. In the beginning, the toy was given away for free, as a prize in cereal boxes. But it required a real potato – not included, as you might suspect. The toy didn’t gain traction when they introduced just the parts to the marketplace, some think because it required a real potato. Instead of giving up (quitting!), the manufacturer decided to include a plastic body in the kit, Hasbro took over, and the rest is history. If you have kids, you know how important Mr. And Mrs. Potato Head were in rescuing Woody from the toy collector in Toy Story!

Failure is a necessary component of success. I started my sales career selling franchises for American Speedy Printing, a Michigan quick-print franchise. Any professional salesperson knows that sales is nothing more than a numbers game. Most say that out of 20 sales presentations you make, you’ll successfully close, or sell, just one prospect.

Each franchise I sold garnered me a $3,000 commission. I was talking to one of the more successful salesman there and explained I was very frustrated that I was hearing “no” again and again and hadn’t received commission money for some time. He told me I was thinking about sales entirely wrong. Instead of just regarding the close as a success, I had to think of each “no” as a success.

I must have looked puzzled, he went on to explain: the commission is $3,000 and statistically, you know you need to make 20 calls to sell one. And then he changed how I thought about hearing “no.” He said that every time he makes a call, he makes $150, or 1/20th of $3,000! Amazing. It’s just a different way of wrapping your head around failure. Each failure gets you closer to a success, so each failure is indeed worth something!