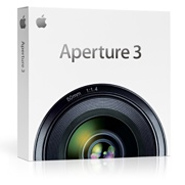 A friend of mine, Duane Burleson, alerted me a few minutes ago that the newly launched Mac App Store is selling Apple’s imaging software, “Aperture”, for $79.99 instead of the $199 it sells for in both Apple’s online store and in its brick-and-mortar locations. (Note: The Mac App Store is available as a free software update, but only for Macs running Mac OS X Snow Leopard.)

My workflow consists of Adobe’s Lightroom and Photoshop CS5 so I won’t be jumping ship, but if someone is contemplating purchasing Aperture, now is the time to act. I’ve heard only good things about Aperture and as far as I can tell, the $79.99 Aperture is not a stripped down version. But I’d let ’em keep the $120 box it comes in!